We’ve been using our own bespoke designed super graphics for a long time as part of the process of developing interior schemes.

At one time they might have been viewed as stand-alone features adding a brand identity to the building but increasingly (if not completely so) these super graphics are an important part of the overall wayfinding strategy. They work alongside the paint finishes helping to identify areas, create landmarks and way points as visitors circulate through a building.

Graphics and visual imagery in general is readily available through stock libraries online but if you look closely you will often observe the same stock images appearing time and time again. We believe that schemes deserve better.

At the Childrens’ Day Unit (Milton Keynes University Hospital) we designed a complete suite of playful graphics based around the theme of the farm which were installed full height on walls throughout the unit. Graphics, flooring and wall finishes were all tuned to work with eachother.

At Birkett House SEN school the headteacher said that there was a noticeable improvement in the way that pupils independently moved to their classrooms rather than being escorted. This was in no small measure due to the way in which we used the finishes and graphics to help make the building more legible to a non-literate population. 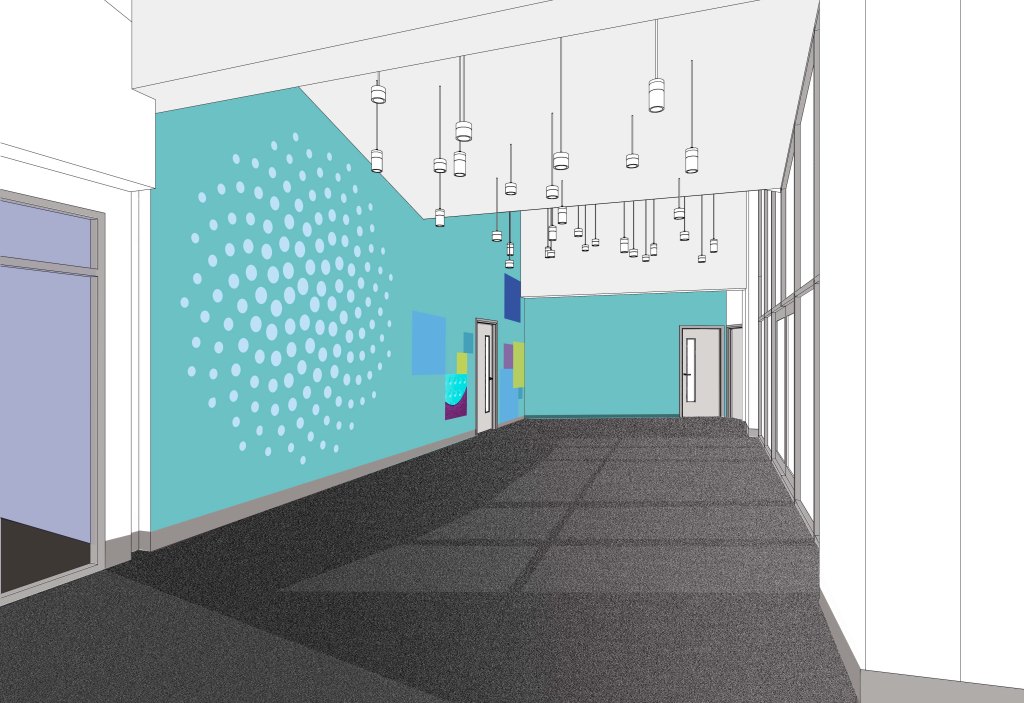 We’ve been working on an interior refurbishment scheme (the Living Environment Project) for a category A prison which has brought some interesting design challenges.

The HMP client were enthusiastic about trying to use design to harmonise the living spaces in order to create a better and less threatening environment for inmates and staff. One of the key concepts that we’ve been exploring is that of biophilic design – in brief the principle that you maximise views to the outside and make connections to green spaces either through elements such as finishes or super graphic references on the basis that we as humans have an innate connection to our natural environment.

The aim is that this will help to reduce aggression and mental health issues in the prison.

“the way in which prisons have been commissioned and built in the past has been a barrier to rehabilitation and the welfare of the workforce”.

Putting full-length windows in cells to give prisoners views of greenery, doing away with long, straight corridors, using timber doors and softening lighting are among the recommendations.

The move comes as researchers begin a study to examine the impact of a more relaxed and humane prison by examining changes at HMP Berwyn.

There, prisoners are referred to as men, housed in communities rather than blocks, and locked up in “rooms” rather than cells.

There have also been attempts at the prison to fill empty wall space with photos of the local Welsh landscape.

Peter Dawson, director of the Prison Reform Trust said: “A normal environment in which people take responsibility for as much of their own lives as possible is preparation for successful release.

“Bars in windows is yesterday’s technology.”

The UK Government is committed to funding ‘super prisons. The first new prisons are expected to be built on the site of former jails at Wellingborough, Northamptonshire and Glen Parva, Leicestershire in 2021 and 2022 respectively. These new prisons will take many of their design cues from the innovative prison programme in Norway as exemplified by Halden Prison – often called the “most humane prison in the world”.

Halden is one of Norway’s highest-security jails, holding rapists, murderers and paedophiles. Since it opened two years ago, at a cost of 1.3bn Norwegian kroner (£138m), it has acquired a reputation as the world’s most humane prison. It is the flagship of the Norwegian justice system, where the focus is on rehabilitation rather than punishment.

Some of the design challenges that we have had to deal with include surveying the internal spaces; quite evidently the production of layout plans of the buildings are highly sensitive. The process of getting sub contractors in and out with tools has been challenging to say the least! The prison service is a vast organisation and personnel including Governors are always on the move so relationship building is important but may need to be re-started as people move about. Its been a slow process but despite these challenges our work at the prison continues. 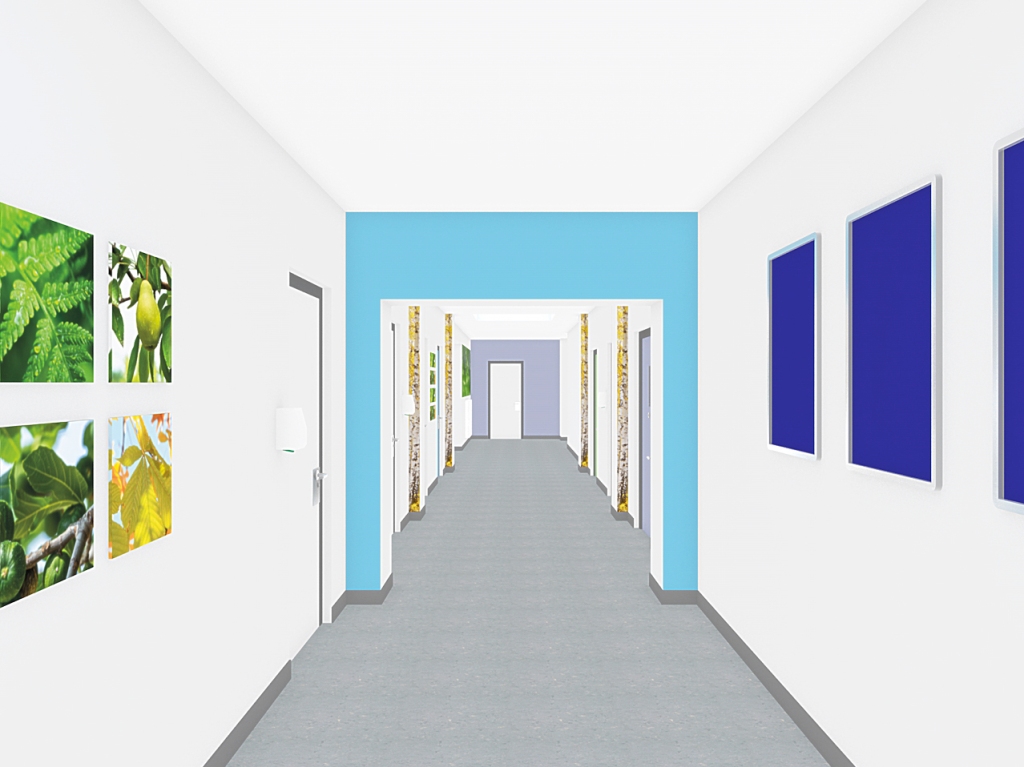 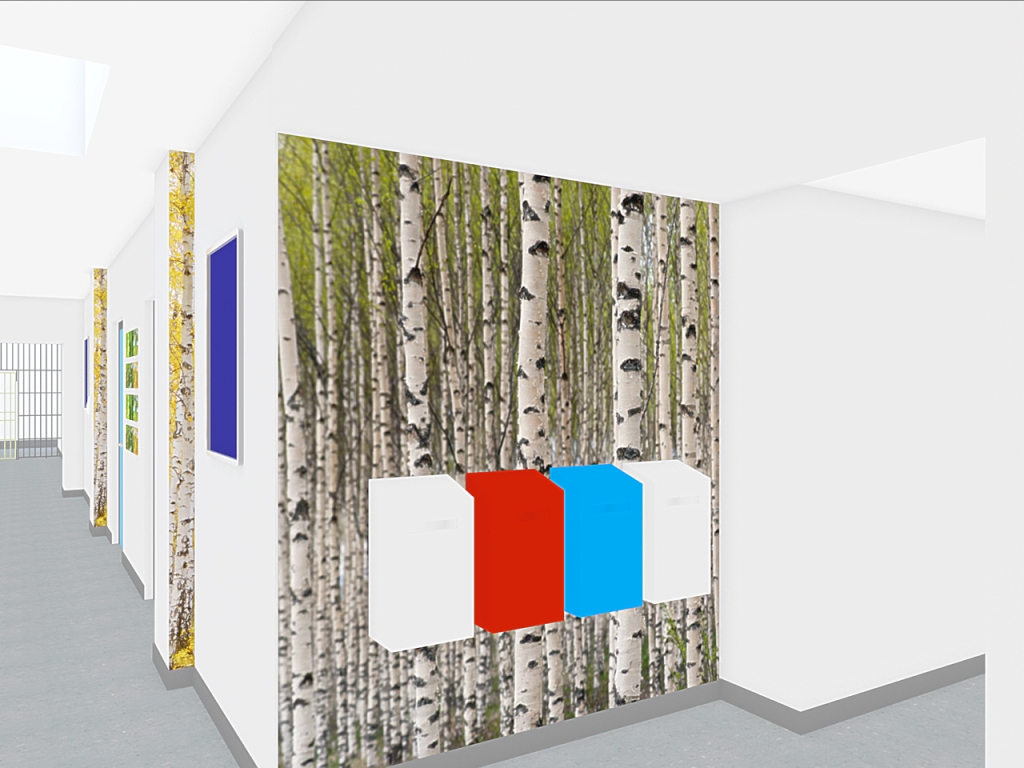 We designed wayfinding signage at Perdiswell working with our signage partner Dlinexsign ltd which was clear and concise. The signage was implemented both internally and externally and helped to reinforce the identity and brand for the centre. An important consideration was the legibility of the signage for all users of the building.

We particularly liked the Jigsaw ‘Puzzle’ secret fixed sign system from Dlinexsign which allows for easier maintenance. The 5mm thick Frosted Lucite panels are spaced from the wall by 8mm and can be easily unlocked and removed to facilitate interior re-decoration. We used that puzzle design principle to guide the way all the graphics were developed when creating the signage family. 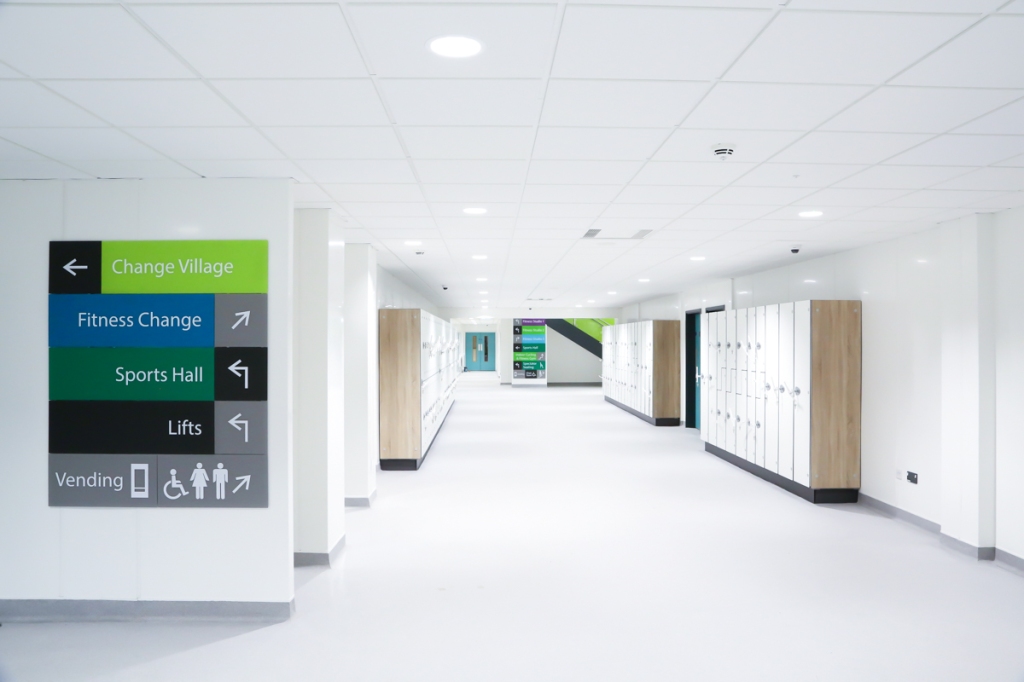 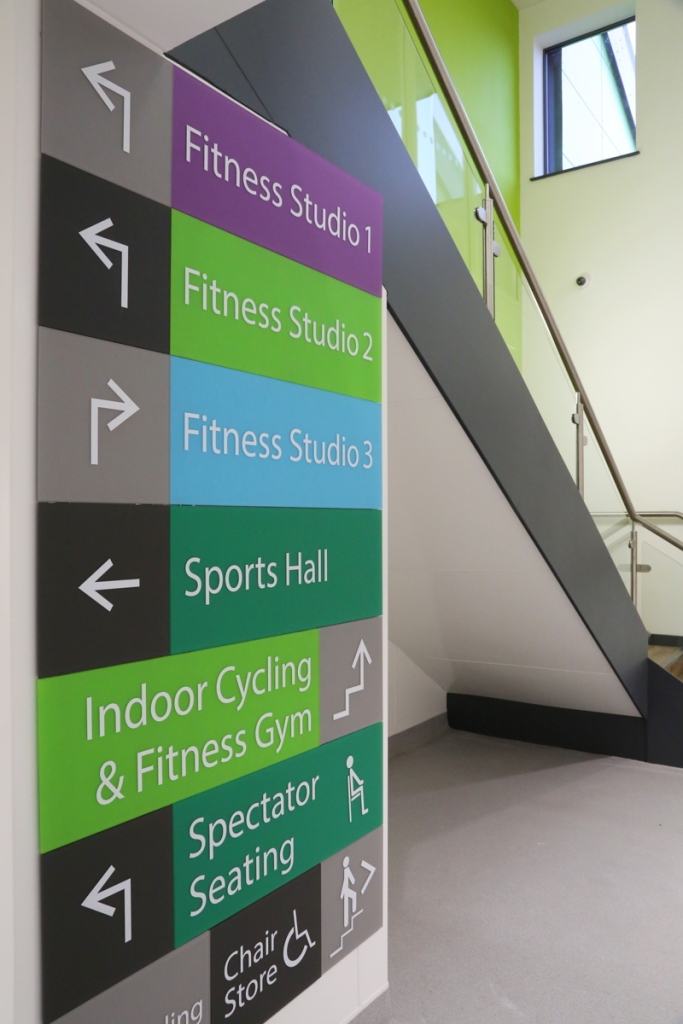 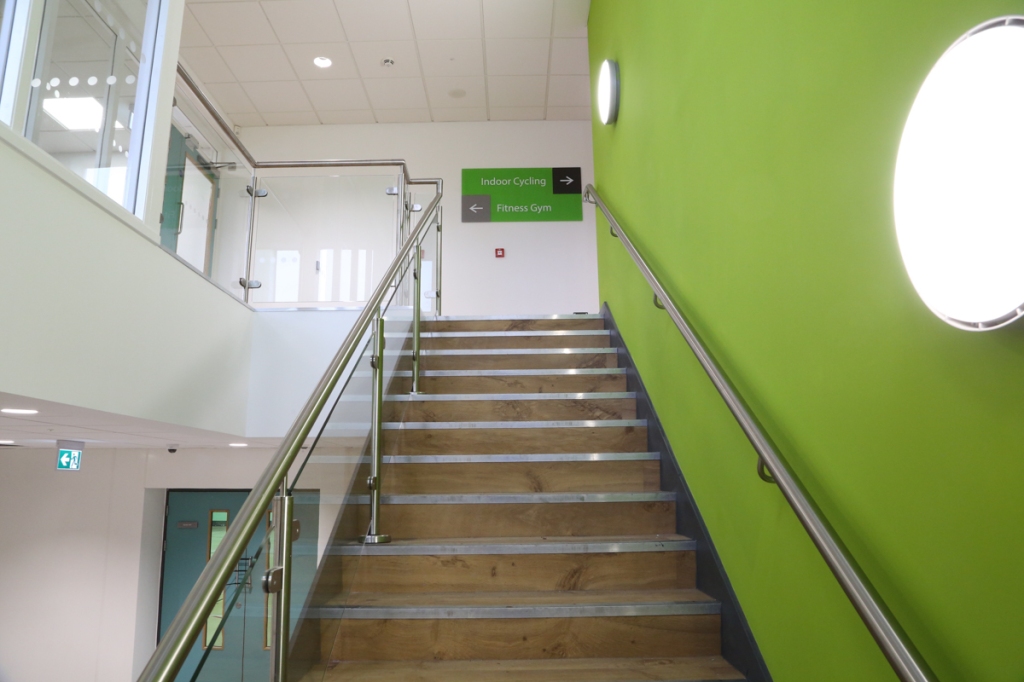 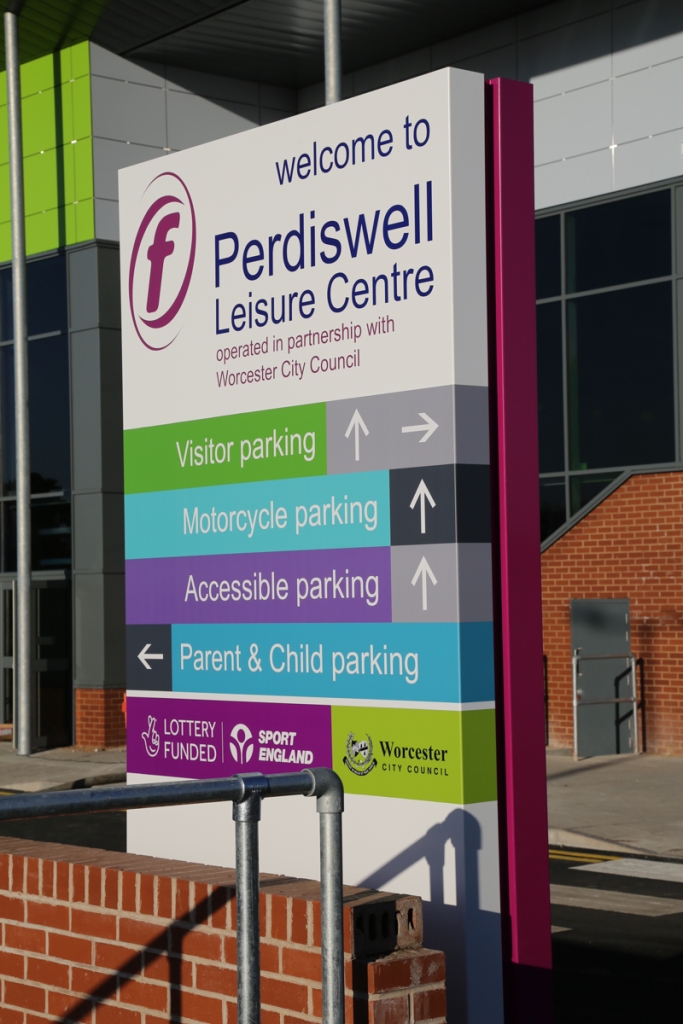 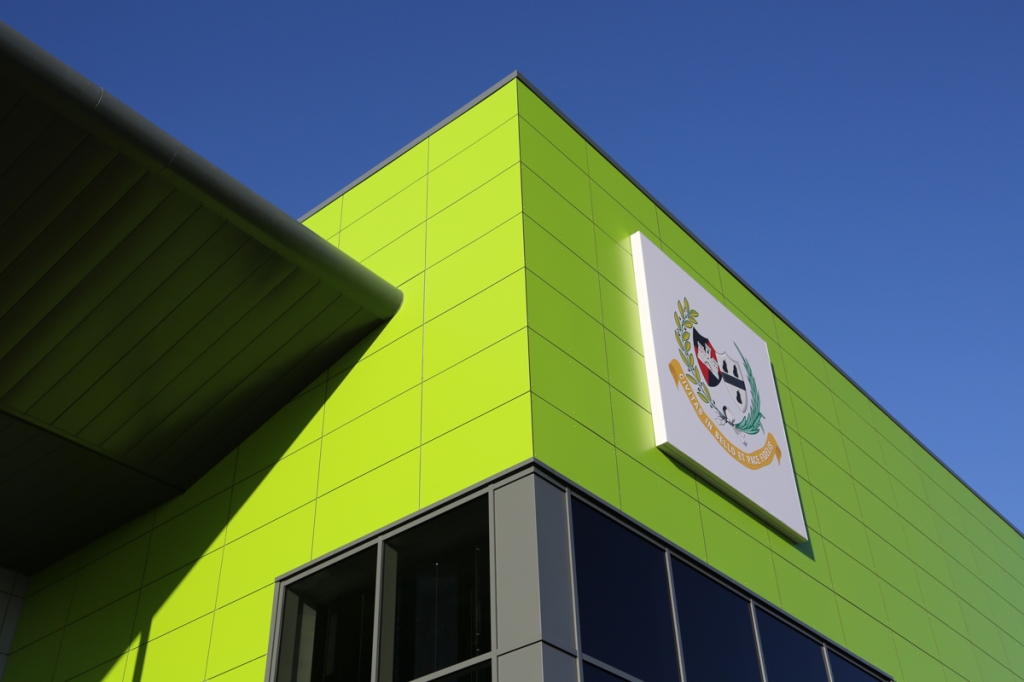 Here are some photos of the Altro Letchworth Headquarters stunning installation we designed using their Altro Whiterock Satins and Chameleon product. We called it ‘Extrude’ and it joyfully rises up through 3 storeys of the factory culminating in a shower of coloured spheres blowing out of big vents. 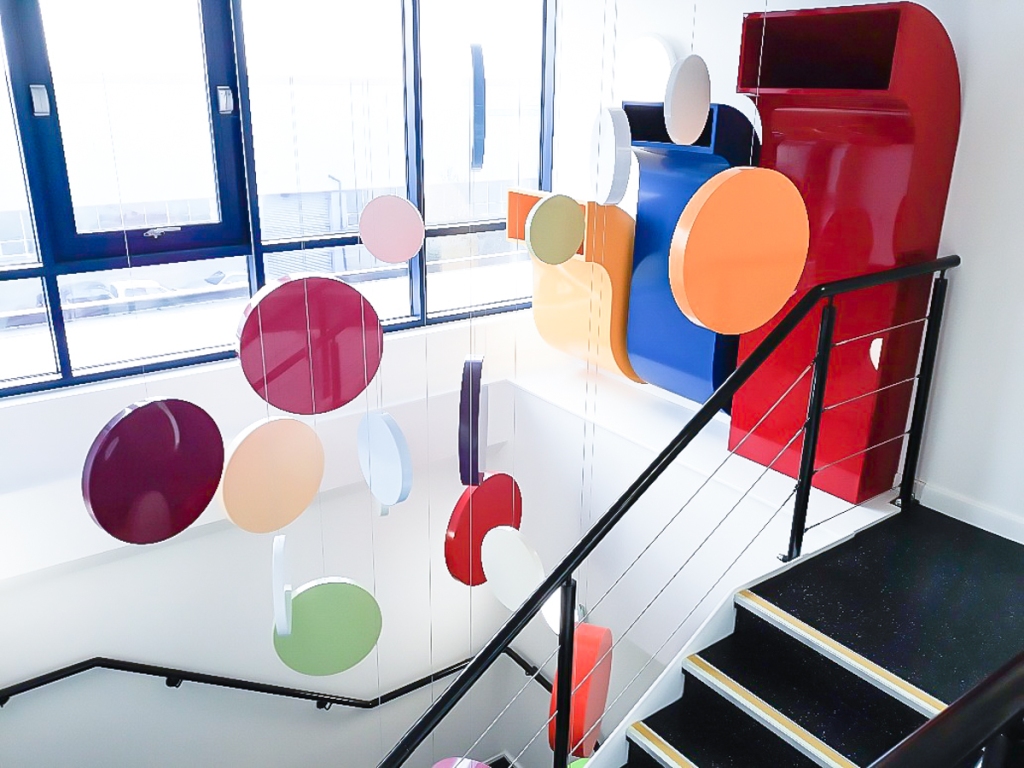 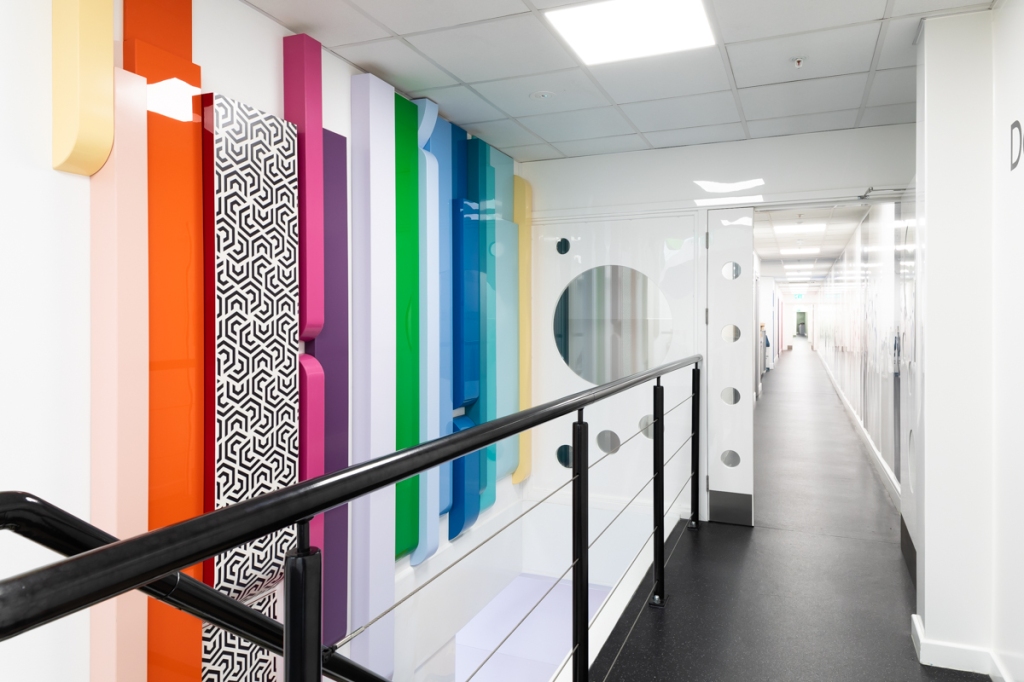 The initial brief of designing a large scale coloured manifestation for the pool hall was expanded to include various other features around the centre as well as advising the client on all the interior finishes. 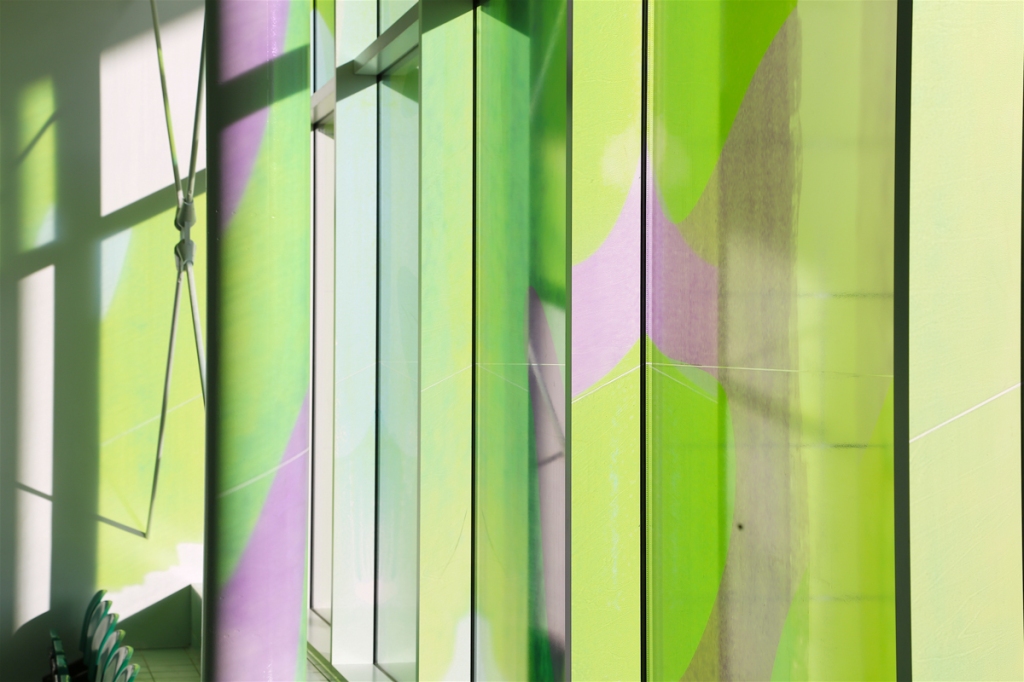 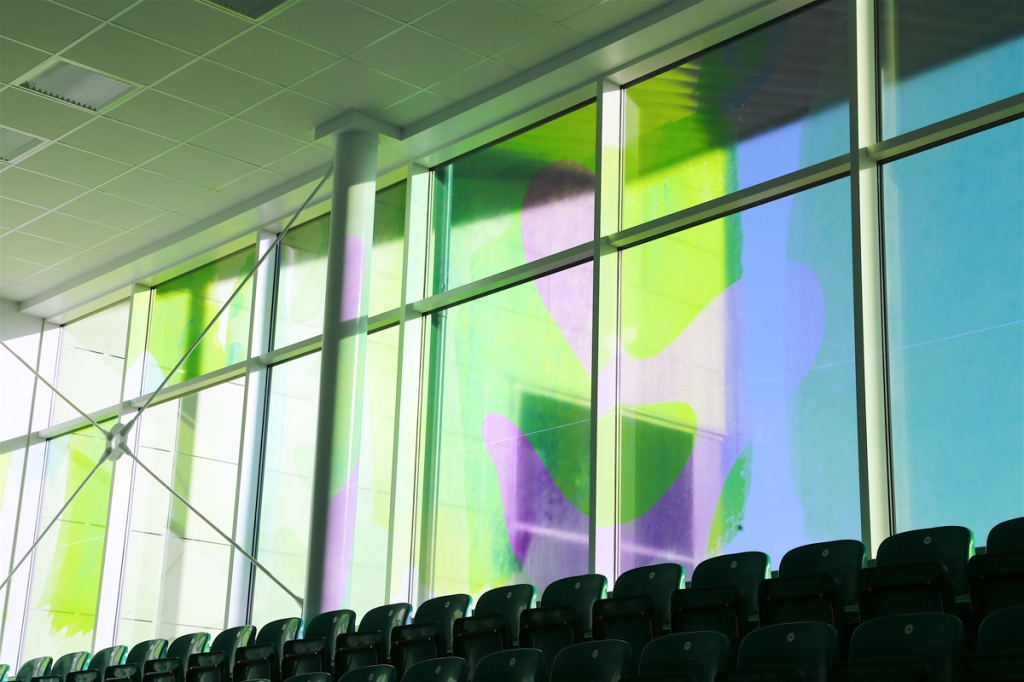 Here’s a great project we were involved in last year in September.  It’s all about transformational design for outside spaces working with volunteers from the Willmott Dixon team based in Bedfordshire.

We recently completed this scheme working with Leicestershire County Council and Willmott Dixon Construction. Newlands Primary school relocated to an existing 1930s school site which had a transformational refurbishment to provide the school with a new home.

Refurbishment projects are often harder to resolve for an interior designer than a new build as you’re trying to tune in to the existing building architecture (rather lovely 1930s period in this case) , strip away the build up of years of detritus and develop a new overarching vision for the scheme. At the same time its important to work with the incoming school to carry over ideas and themes they’ve been using on their old site but at the same time refresh and in some cases re-direct. When it works the results are astonishing. 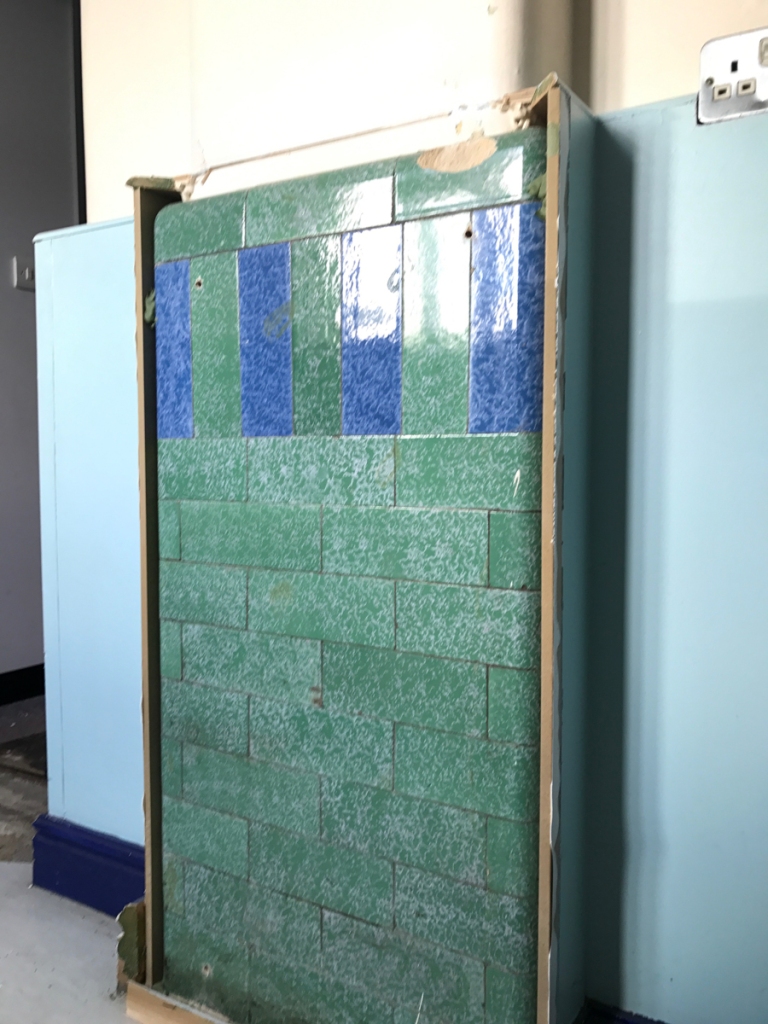 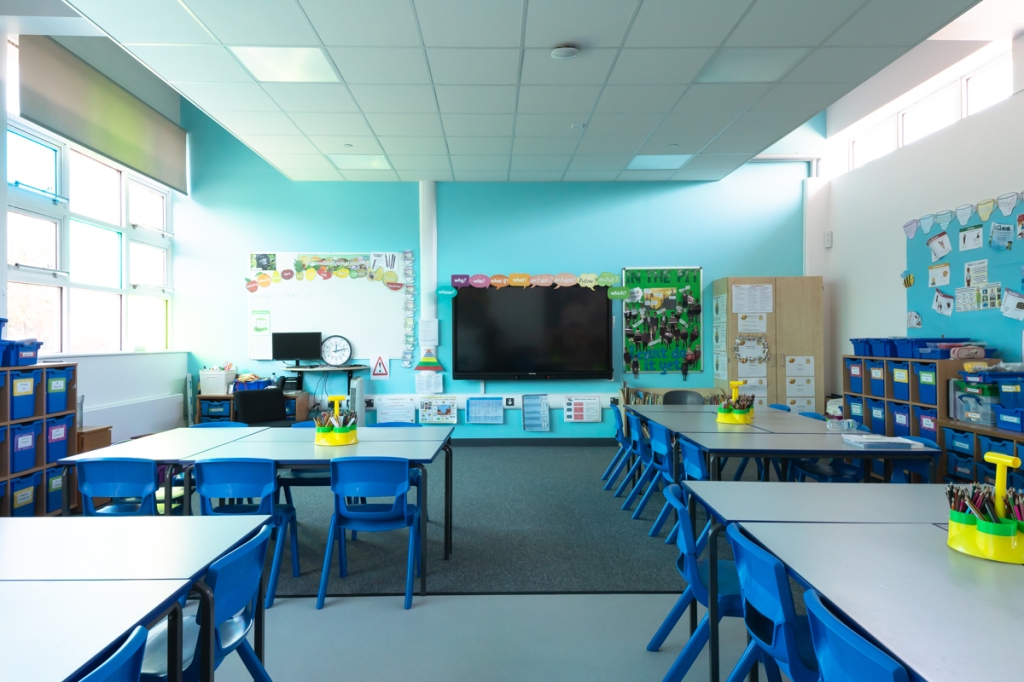 The Milton Mouse Children’s Unit at MK University Hospital is getting a makeover.

The project started with a commission from the Arts for Health team to develop a mural design for Ward 4 on the Children’s Unit. The brief was to develop a feature that would enhance the ward with minimal maintenance implications. We ran some very successful engagement sessions with staff and young patients to create river themed artwork and this was then developed into a wall ‘river’ super graphic which was installed by local sign company Chameleon on the existing wall panels along the main corridor leading into the ward.

The hospital were so delighted as were their patients that a few months later the hospital asked Cantoo to take on a much bigger scheme to help transform the entire Children’s Unit consisting of 2 wards and a day centre unit with a whole range of graphics and other associated refurbishments.

Part of the scheme included producing new layouts for the Play Area, coordinating the installation of some immersive technology as well as designing bespoke fitted furniture and specifying new loose furniture. We also helped to develop an overarching colour scheme which was used as part of the ongoing decorating maintenance programme.

The project has been delivered in phases; Ward 4 was followed by Ward 5 and now we’re about to implement works on the day centre unit, Milton Mouse, for young out-patients. 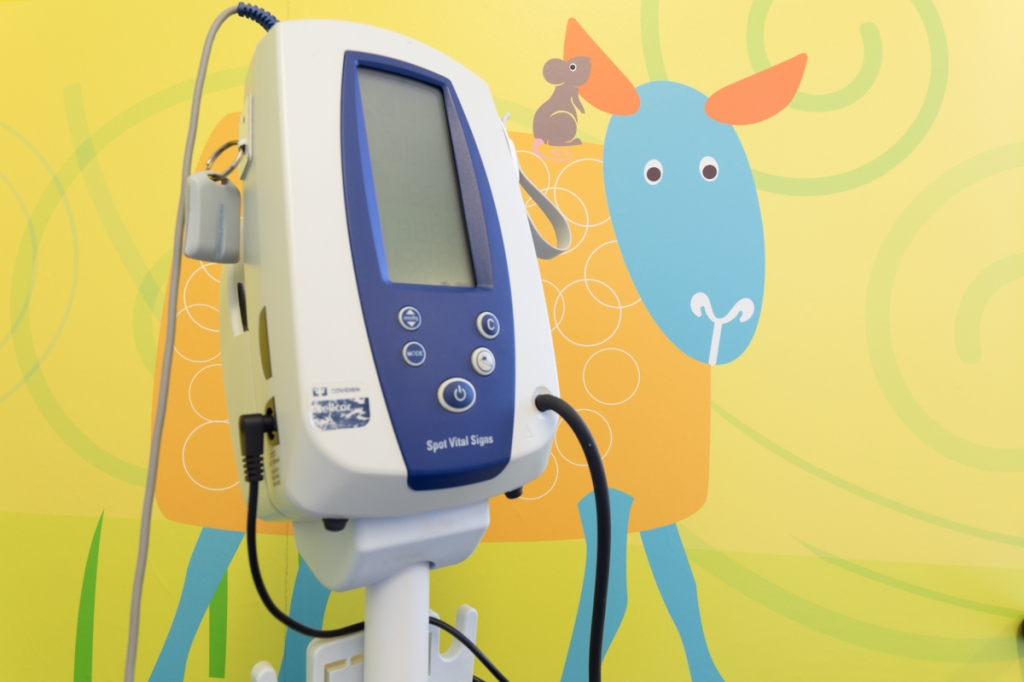 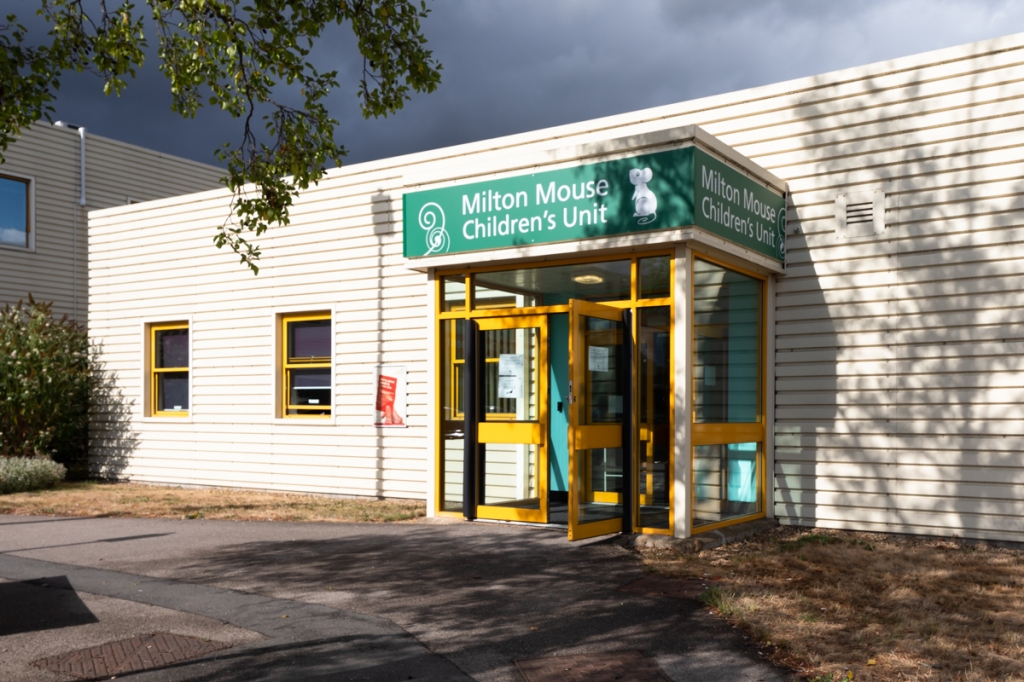 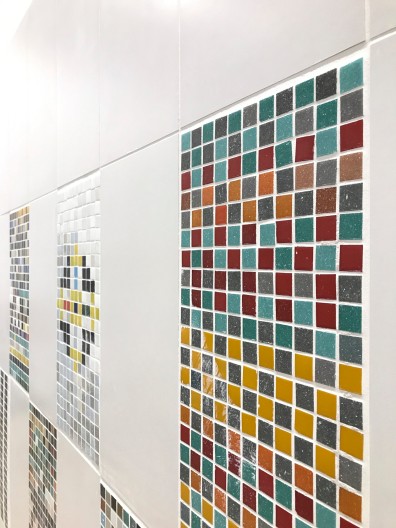 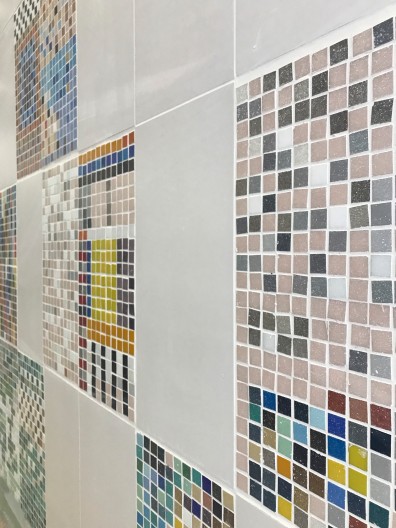 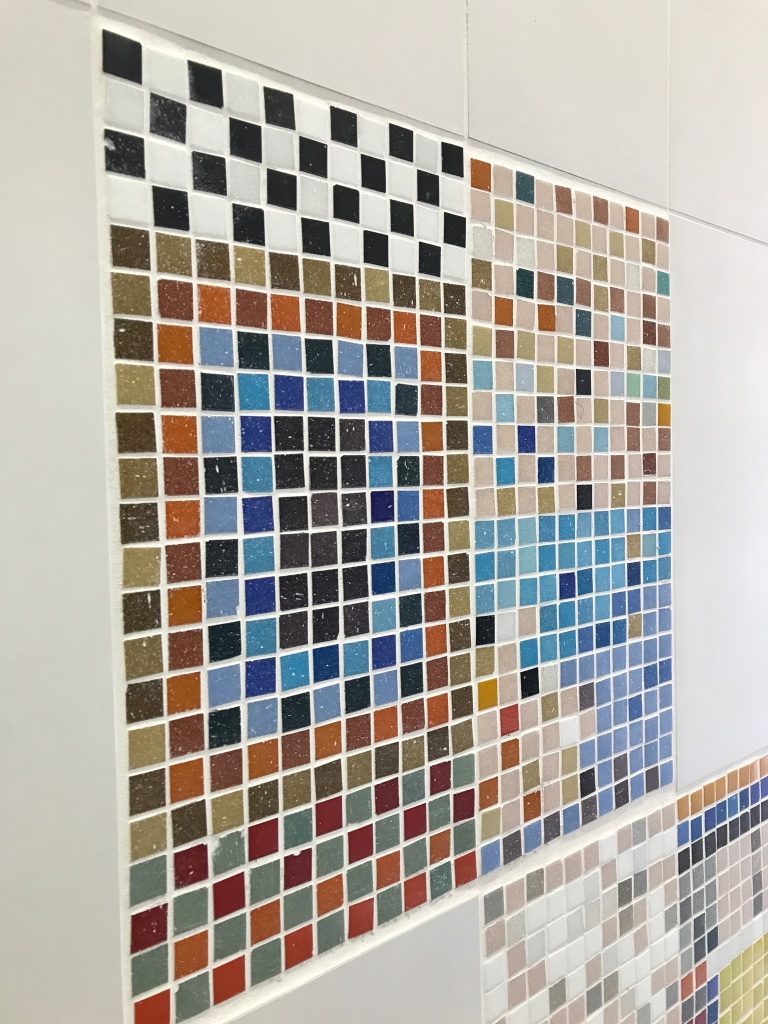 For the last year or so we’ve been working as the Interior designers for the Birkett House special school new build scheme in Leicestershire. Our client is Leicestershire County Council with the main contractor as Willmott Dixon Construction.

A key part of what we do are the engagement processes we like to develop with a school in order to understand how they tick so that our design can be part of the transformative outcomes for staff and pupil.

One of these projects has been an inclusive mosaic project for the hydrotherapy pool that encouraged every pupil and lots of staff to produce a mosaic tile to help energise the pool area and contribute to a sense of ownership.

The overall concept was that the mosaic tiles would be arranged in a pattern similar in concept to the Lego urban art interventions and the tessellated super graphics being used in other places around the school such as the circulation areas. The background thinking to this is that pupils on the autistic spectrum respond favourably to logical repeated patterns which in turn contributes to a calming environment.

We created a template for the mosaics based on the 250x500mm standard white pool tile. This was the template that the school used to set out their mosaics. After some initial worries that we wouldn’t be able to produce enough tiles; the school eventually generated over 150 mosaic sets – more than enough!

We ran inset training workshops with the staff and also supervised some of the pupil workshops to ensure that we had a consistent approach. The task itself particularly suited children on the autistic spectrum as it requires accuracy, gluing the tiles precisely within the lines, and an ability to develop abstract patterns.

One member of staff working with complex needs children with limited motor skills devised a particularly creative approach on how to engage her class. Children painted their design onto the mosaic template which was then duplicated by members of staff as the final mosaic pattern. This was a very good solution to the challenge of enabling every pupil to contribute to the scheme. 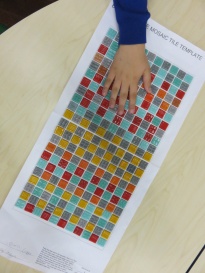 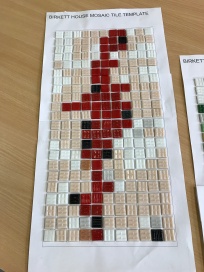 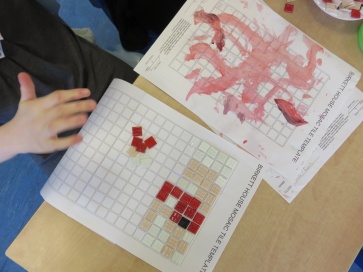